The Tale of a Tank And Other Yarns 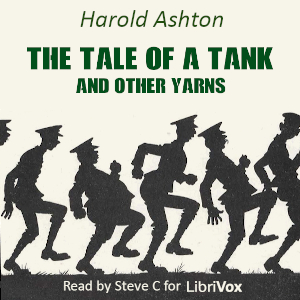 The Tale of a Tank And Other Yarns

LibriVox recording of The Tale of a Tank And Other Yarns by Harold Ashton.
Read in English by Steve C
Harold Ashton was the War Correspondent of The Daily News during the First World War and reported extensively on the British army’s involvement in the conflict. Whether working alongside the British troops that were fighting on the frontline or in the trenches or accompanying the massive logistics operation behind the lines – be it the transporting of munitions and supplies or seeing at first hand the work of the Royal Army Medical Corps – he reported on the successes and failures, the tragedies and victories over the course of the war.

But this book of short stories shows another side of a war-weary reporter and another side of the war. Ashton has created a diverse selection of yarns, some maybe based on a vague semblance of fact whilst others are pure fiction but all of them reflect classic British humour to some degree. - Summary by Steve C
For further information, including links to online text, reader information, RSS feeds, CD cover or other formats (if available), please go to the LibriVox catalog page for this recording.

For more free audio books or to become a volunteer reader, visit librivox.org.

Uploaded by librivoxbooks on January 11, 2022